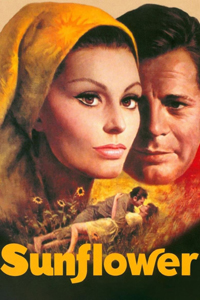 At the end of World War II, Giovanna, a war bride living near Milan refuses to accept that her husband, Antonio, missing on the Russian front, is dead. There’s a flashback to their brief courtship near her hometown of Naples, his 12-day leave to marry her, ruses to keep him from deployment, and the ultimate farewell.  Antonio has no desire to fight in the conflict, but officials see through the charade and Antonio is sent to the Russian front, where the soldiers are plagued by freezing temperatures and short supplies of rations.  He is found half-dead in the cold by a Russian peasant girl, Mascia (Lyudmila Savelyeva).  She takes him in and eventually they marry.  Giovanna waits in vain for word on the fate of her husband, who is officially declared missing in action.  She goes to Russia to try to find him, searching records and cemeteries.  Finally, she discovers first his new wife, then him, and reluctantly decides not to fight the situation.  Returning home to Italy, she marries an older factory worker, Ettore and they have a son, but Antonio still longs for Giovanna, and he returns to Italy to discuss a reconciliation with her.