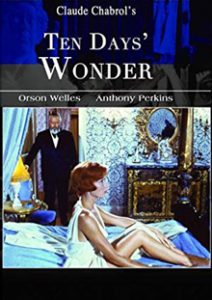 Anthony Perkins, a young sculptor with a weird penchant for waking up in strange hotels with his memory wiped clean and bloodied hands, invites a former professor (Michel Piccoli) to the Gatsby-like provincial manor presided over by his powerful tycoon father (Orson Welles). Welcomed by Welles’ young wife (Marlene Jobert), Piccoli soon finds a nest of rats beneath the bourgeoisie voluptuousness — a clan bound in a circle of illicit romance, blackmail, faked burglaries and, of course, murder.