That Was the GDR 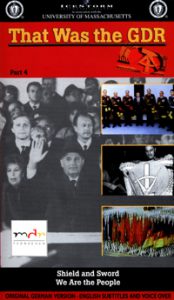 This video includes two documentaries covering aspects of the cultural, economic, and political developments from the founding of the GDR, to German unification on October 3, 1990. A historical collage about the German Democratic Republic, in the form of stories told by East Germans, both prominent and unknown.

The Ministry for State Security (MfS) was from its founding in 1950 the central instrument of domination, the “shield and sword of the Party” for defense against external and internal enemies. The Stasi, the political secret police, conducted surveillance and investigated punishable activity. A gigantic European surveillance apparatus ultimately appeared – spies and informants with German thoroughness, millions of victims and mountains of files in the “Gauck Archives.”

We are the People

“We are the people” was the chant of 70,000 protesters in the streets of Leipzig and with it came the end of the German Democratic Republic (GDR). It begins as the GDR enjoys its greatest success, recognition by the Federal Republic of Germany, and ends with the hope for two German States and peaceful coexistence.  From this point on the GDR walked a tightrope between détente and diverging from the West.