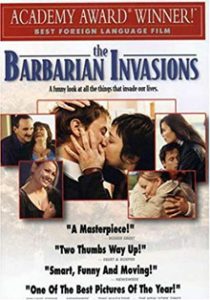 In this belated sequel to ‘The Decline of the American Empire’, 50-something Montreal college professor, Remy, learns that he is dying of liver cancer. He decides to make amends meet to his friends and family before he dies. He first tries to made peace with his ex-wife Louise, who asks their estranged son Sebastian, a successful businessman living in London, to come home. Sebastian makes the impossible happen, using his contacts and disrupting the entire Canadian system in every way possible to help his father fight his terminal illness to the bitter end, while he also tries to reunite his former friends, Pierre, Alain, Dominique, Diane, and Claude to see their old friend before he passes on.