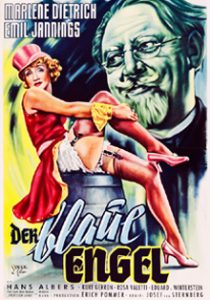 Germany 1924. Middle aged Dr. Immanuel Rath is a literature professor at a boys college. Most of his students don’t much like him, often calling him “unrath” – German for garbage. Dr. Rath learns that many of his boys often frequent a cabaret called Der blaue Engel – the Blue Angel – which he believes is corrupting their impressionable young minds. He heads to the Blue Angel himself to catch the boys in the act and shame them into not going again. Over several visits, Rath is able to catch the boys, but in the process he also understands what attracts the boys, namely the headlining performer Lola Lola. Rath falls under Lola’s spell, he who falls in love with her – and she seemingly with him – so much so that he wants to marry her and give up his teaching career to be with her on her travels from cabaret to cabaret. Their relationship ends up not being what either envisioned, the question being how they will both deal with their disintegrating relationship and the reasons behind that …