The Boundaries of Our Time: Caspar David Friedrich 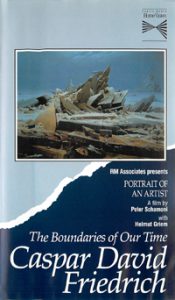 During the night of June 5, 1931, a major fire broke out in Munich’s Glass Palace. Among the inferno’s victims, the entire German Romantic exhibition, including ten major works by Caspar David Friedrich. People talked of a national catastrophe.

The Boundaries of Our Time is a compelling look at the intellectual and historical significance of the great German artist Caspar David Friedrich. Amazingly, this film fulfills Friedrich’s own desire of having his paintings viewed with classical music. The specially composed score blends beautifully with Friedrich’s large masterpieces, creating a deeply spiritual mood. Director Peter Schamoni captures the drama of the original landscapes with an astonishing number of brilliant scenes. Based on writings by Friedrich ‘s friend and pupil, C.G. Carus, and Friedrich himself, this program offers a beautiful collage of the Romantic world seen through Friedrich’s own eyes and explored in his own thoughts.  (In English)