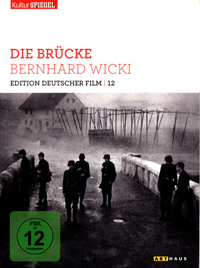 In the waning days of World War II, as American forces overtake Germany, seven teenage boys are pulled from their small town’s school as emergency conscripts to repel the advancing Americans. Given almost no training, they’re assigned the task of defending a small bridge that’s scheduled to be demolished. But when the boys’ commander is mistaken for a deserter before he can give their orders, they’re stranded in front of an advancing enemy with no idea what they’re supposed to do.