The Civilizers: Germans in Guatemala 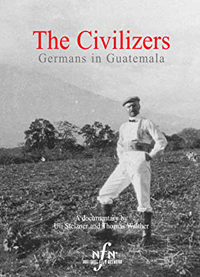 Since the introduction of coffee growing, the history of Guatemala has been dictated by a small but very influential German community. In The Civilizers, the old coffee barons lead you through their huge plantations and drawing-rooms, show old films and share faded photographs. The legacy of colonization emerges from their history: like slaves, the Mayan Indians pick coffee, sort cardamom, provide cheap labor for the textile factories and tolerate the occasional pat on the head. Even today, the younger generation of entrepreneurs continues to profit from the pioneering work of their forefathers and boast about the positive balance of trade and key costs in the government, behind the facade of anonymous company names. But war and violence reign in this country of permanent dictatorship. The Indians are continuously battling against land confiscation, abuse and massacres. In this film, questions of power, identity and civilization are brought to the forefront, as the Guatemalan people continue to be exploited by their patronizing “guests.”