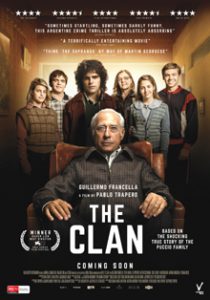 The Puccios…? A model family! They are few, those that could match them. The father? A dignified man, (honest) storekeeper by trade, who cares about his five children, going as far as to supervise the homework of his youngest daughter. The mother? Both a dedicated teacher and a regular Martha Stewart. The children? Well-educated and promised to a bright future. Alejandro, for one, is already an admired rugby star. Except that… all this respectability is nothing but a smokescreen! The truth is that Arquimedes Puccio is also – and mainly – the tyrannical leader of a criminal gang composed of… his wife and children. Puccio’s undercover activities ? Well, they consist in kidnapping rich people (preferably young), detaining them in his own house, torturing them gratuitously and doing away with them after cashing the ransom. The Puccios, a model family? Yes, but a model evil family!