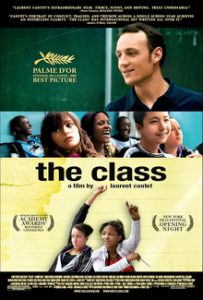 An almost autobiographical film that highlights power struggle between a teacher who wants to do good and students who disagree about what “good” is. Neither side is seen as right, and both seem trapped by futility. In a lower-income, melting-pot neighborhood in Paris, a teacher, Francois, begins a school year with high hopes and a desire to be liked by his students. They are a multiethnic group of 15- and 16-year-olds, few of them prepared by the educational system to be promising candidates for Francois’ hopes. None of them seem stupid, and indeed intelligence may be one of their problems: They can see clearly that the purpose of the class is to make them model citizens in a society that has little use for them…