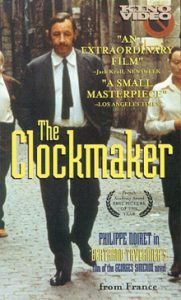 Michel Descombes is a watchmaker in the district of Saint-Paul, Lyons. He lives quietly, alone with his almost grown-up son, Bernard. One day, the police come and say Bernard murdered a FACTORY OWNER. Superintendent Guiboud asks Michel for help. But Michel realizes how little he knows about his son. He also starts to feel he is unable to blame his son.