The Dawns Here Are Quiet 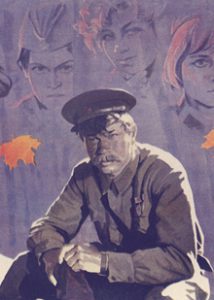 Set in Russia, in 1941, during the Second World War. The Red Army Sergeant Vaskov is stationed at a remote artillery post. Vaskov is in charge of five young women recruited for military training in the Red Army. One day they are surrounded by a group of Nazi paratroopers, who had penetrated into the Russian territory beyond the front-line. Now Vaskov with five women-trainees have to stop the enemy in an unequal fight.