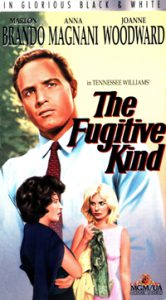 The Fugitive Kind is a 1960 American drama film directed by Sidney Lumet. The screenplay by Meade Roberts and Tennessee Williams was based on the latter’s 1957 play Orpheus Descending.  Valentine “Snakeskin” Xavier is a guitar-playing drifter who earns his nickname from his jacket. He flees New Orleans to a small town in order to avoid imprisonment. On his 30th birthday he decides to change his drifting “party boy” life. He finds work in a small-town mercantile store operated by an embittered older woman known as Lady Torrance, whose vicious husband Jabe lies ill in their apartment above the store. An undercurrent of violence, past and present, dominates the town. Both the frequently drunk libertine Carol Cutrere and simple housewife Vee Talbott set their sights on the newcomer, but Snakeskin is attracted to Lady, who has grand plans to open a beautifully decorated “ladies confectionery” wing to the run down store. Sheriff Talbott, a friend of Jabe as well as Vee’s husband, threatens to kill Snakeskin if he remains in town, but he chooses to stay when he discovers Lady is pregnant. This sparks Jabe’s final acts of resentment, leading to tragic consequences.