The History of the Volkswagen 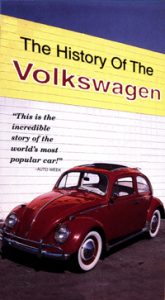 This revealing program looks at the history of the Volkswagen Beetle opening up the secret history of the World’s most popular car.  By the sixties, the Beetle had won itself cult status.  At the height of its popularity history’s best selling car even starred as lovable, human Herbie in Disney’s box office hit movies.  However, behind this heart-warming image lies another.  The car was originally Hitler’s baby.  He even provided some early design sketches, and in May 1938 he opened the huge new Volkswagen factory declaring  that it would become a symbol of National Socialism.  By the end of the war, the Volkswagen works had been heavily bombed by the Allies but could still be used.  Turned down by the Ford Motor Company, the factory was handed over to the regional government in Lower Saxony, eventually to be privatized as the Volkswagen we know today.  It went on to sell more than 25 million Beetles.  The program traces how, in the post-war years, the Beetle’s image was transformed, into the chosen symbol of peace and flower power and examines its current adoration by a new generation of bug-lovers.  (In English)