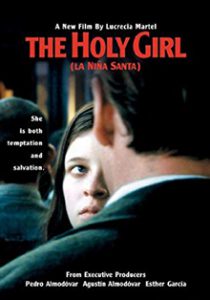 ENT physicians gather at a provincial hotel in Salta. The hotel owner, Helena, is subdued, brittle, avoiding the calls of her ex-husband’s pregnant wife. Family dysfunction seems everywhere. Helena’s daughter, Amalia, about 14, discusses vocations in a Catholic girls group. Their teen imaginations conflate the erotic, the religious, and the lurid. Amalia notices Dr. Jano, and he notices her. She decides to make him her vocation, she follows him, he rubs against her in a public crowd, he’s appalled at his actions. Meanwhile, Helena believes Jano is attracted to her even though he’s married. Longing, guilt, scandal, and teen sensuality are set to collide.