The Horse of Pride 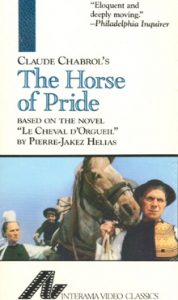 In early twentieth-century Brittany, two peasants marry, have a son, and live in traditional Breton ways: three generations under one roof, a division of labor between the sexes, elders’ stories at night, politics and religion during their little free time. Times are hard: la Chienne du Monde drives some to suicide; Ankou (death) is close at hand. Pierre is born into this republican family, his lyric childhood interrupted by the outbreak of war and his father’s conscription. He learns his catechism and, as a child of a Reds, also reveres school. His grandfather and father often put him on their shoulders, giving him a ride on the horse of pride.