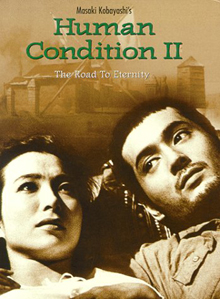 Kaji is sent to the Japanese army labeled Red and is mistreated by the vets. Along his assignment, Kaji witnesses cruelties in the army; he revolts against the abusive treatment spent to the recruit Obara that commits suicide; he also sees his friend Shinjô Ittôhei defecting to the Russian border; and he ends in the front to fight a lost battle against the Russian tanks division.