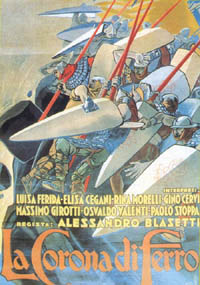 Sedemondo (Gino Cervi) kills his brother, usurps the throne of his Italian kingdom, and then rules without regard for law or justice. An elderly seer warns the wicked king that his actions will result in his ruin, but he continues his dictatorial ways. Meanwhile, Arminio (Massimo Girotti), Sedemondo’s nephew, whom he had exiled to the wilderness, grows to become a powerful warrior. Arminio joins forces with Tundra (Luisa Ferida), another orphan, and returns to avenge his father’s death.  The narrative revolves a sacred iron crown and a king who is prophesied to lose his kingdom to his grandson. It blends motifs from several European myths, legends and modern works of popular fiction. The film won a Coppa Mussolini award, which is the ancestor to the Golden Lion.  It was a not-so-subtle commentary on the rule of Mussolini and the fascists, who controlled Italy at the time.  It contrasted the government’s ruling of the country through violence, deceit and oppression with the eventual coming of honor and peace.  Joseph Goebbels saw the film in Venice and understood all too quickly the real message behind the film exclaiming: Had a German director made this film, I would’ve had him shot.