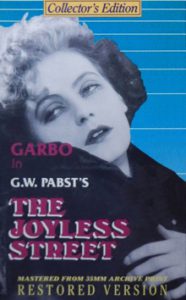 Vienna in the biggest depression, directly after WW1. In a slum, Lila Leid, the wife of lawyer Leid is murdered, Egon, secretary of one of Leid’s clients is arrested. He was with her, and had her necklace, because he needed some money for his own stock exchange deals. The same deal brings poverty to ex-government official Rumfort, his daughter Greta, who also has lost her job, tries to get some money to get food. She rents a room of the flat she, her young sister and her father are living in to an American Red Cross official, who pays $60 rent, but the money is taken by some of her father’s creditors. But their neighbour, shop owner Mrs Greifer knows how to “help”, she and Mrs. Merkel are running a nightclub with a brothel…