The Keys to the House 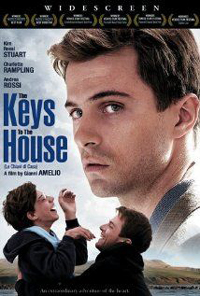 When his wife dies during childbirth, repairman Gianni (Kim Rossi Stuart) can’t accept the responsibility of his newborn son and gives him up. Fifteen years later, he meets his son, Paolo (Andrea Rossi), for the first time on a train to Berlin, and discovers that he’s disabled. The meeting is awkward, and Gianni is stunned by the treatment Paolo receives from his German doctors. Eventually, with the help of another parent (Charlotte Rampling), Gianni learns to cope with delayed fatherhood.  In his attempt to foster a relationship, Gianni finds Paolo full of shocks and wonders, eventually realizing that the keys to one’s house are often the keys to one’s heart.