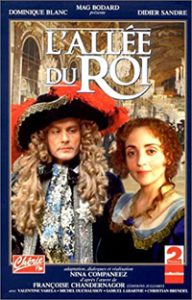 Inspired by the novel of the same name by Françoise Chandernagor, this two-part television film retraces the life of Françoise d’Aubigné, who became Madame de Maintenon. Following a brief description of her early youth, the story takes shape with her marriage to the satirical poet Paul Scarron, and continues through her prodigious rise to the court of Louis XIV, whom she marries in 1683 at the age of forty-eight. The film focuses in particular on the period during which she was governess of the illegitimate children of Madame de Montespan and the king, as well as her stormy relationship with the marquise, who could not bear to see the king marry another. The film ends with the King’s death in Saint-Cyr, April 15, 1719.