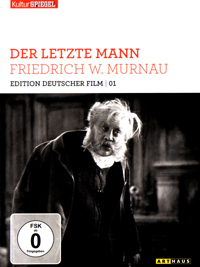 Proud of his position, responsibilities and uniform, a hotel doorman is shocked to find out that he has been demoted to washroom attendant; humiliated, the old man struggles to carry on with his life.

Murnau’s silent film The Last Laugh tells the tragic story of a self-confident hotel porter, brilliantly portrayed by Emil Jannings, who is demoted to lavatory attendant. The porter’s entire identity is based on his position and especially on his uniform, which symbolizes power and respectability to his lower-middle-class community of family and friends. The film’s most shocking and brutal moment comes when the hotel manager unrelentingly strips the pleading porter of his uniform; it is as if his skin were being ripped off. But this is only the beginning of his trials. The unexpected deus-ex-machina ending tries to whitewash the porter’s suffering, but his tragic decline remains unforgettable.