The Law of Desire 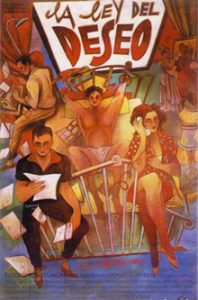 The story focuses on a complex love triangle between two men and a transwoman. Pablo, a successful gay film director, disappointed in his relationship with his young lover, Juan, concentrates in a new project, a monologue starring his transsexual sister, Tina. Antonio, an uptight young man, falls possessively in love with the director and in his passion would stop at nothing to obtain the object of his desire. The relationship between Pablo and Antonio is at the core of the film, however, the story and own drama of Pablo’s sister, Tina, plays a strong aspect to the plot.