The Life of Jesus 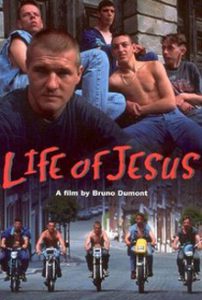 A social movie about current life in the north of France. Freddy and his friends are all unemployed. They pass away time by wandering around on their motorcycles and by directing their aggressive feelings towards Arab immigrants. Freddy is in love with Marie, a cashier at a local supermarket. When she is proposed to by Kader, a young Arab man, Freddy and his friends have an idea: they decide to punish Kader for what they call “such a provocation.” After they have raped another girl, Marie finally commits to Kader, which seals his fate.