The Lovely Month of May 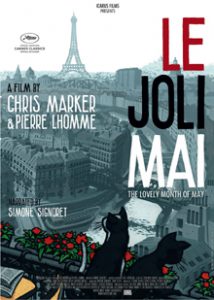 Chris Marker and Pierre Lhomme’s LE JOLI MAI (The Lovely Month of May) is a portrait of Paris and Parisians during May 1962;the first springtime of peace after the ceasefire with Algeria and the first time in 23 years that France was not involved in any war.