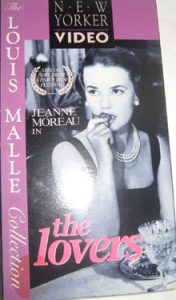 Jeanne Tournier (Moreau) lives with her husband Henri (Alain Cuny) and child in a mansion near Dijon. Her emotionally remote husband is a busy newspaper owner who has little time for his wife, except when he chooses to place demands upon her; often they sleep in separate rooms. Jeanne escapes to Paris regularly when she can spend time with her chic friend Maggy (Judith Magre) and the polo-playing Raoul (José Luis de Vilallonga), Maggy’s friend and Jeanne’s lover

Jeanne’s constant talk of Maggy and Raoul leads to Henri demanding that Jeanne invite them to dinner and to stay as overnight guests. Jeanne’s car breaks down on the day of the dinner party, and she accepts a lift from a younger man, Bernard (Jean-Marc Bory), and then asks him to drive her home. By the time they get back, Maggy and Raoul have already arrived at the mansion. It transpires that Bernard, an archaeologist, is the son of a friend of Jeanne’s husband, and he too is added to the guest list. Jeanne spurns Raoul’s advances, claiming it is too dangerous, but she spends time in a small boat on the river with the attentive Bernard. Clandestinely, they spend the night together. In the morning, to the surprise of everyone, Jeanne leaves with Bernard for a new life.