The Marriage of Maria Braun 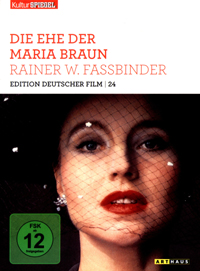 Near the end of World War II, Maria (Hanna Schygulla) marries Hermann (Klaus Lowitsch), who is immediately sent off to battle. When the war concludes, Maria believes that Hermann is dead. She starts working at an Allied bar, where she meets American soldier Bill (George Byrd). They start a relationship that is interrupted when Hermann returns alive. During a scuffle between the men, Maria accidentally kills Bill. Hermann takes the blame and goes to jail, while Maria learns to live without him.  Ultimately, they both come to a tragic end.