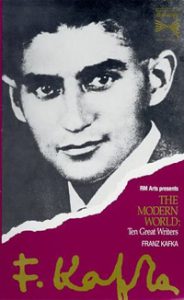 This ground-breaking video series combines drama, documentary and critical analysis by renowned authors and critics – including Anthony Burgess, V.S. Pritchett, and Frank Kermode – to illustrate the works of writers who were among the first to envision life in the modern world. Each program presents the author’s personal experiences, background and artistic philosophy while focusing on important works.

Most of Kafka’s stories and novels are about people who suffer, for no apparent reason, persecution, humiliation, and chastisement.  In The Metamorphosis, a harmless man wakes up to find himself a giant insect, while The Trial‘s twisting narrative follows the plight of Joseph K., arrested for a nameless crime and executed.  “Kafkaesque” has now come to describe a world ruled by anonymous bureaucracies where the innocent suffer meaninglessly.