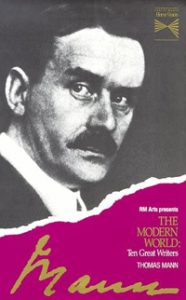 This ground-breaking video series combines drama, documentary and critical analysis by renowned authors and critics – including Anthony Burgess, V.S. Pritchett, and Frank Kermode – to illustrate the works of writers who were among the first to envision life in the modern world. Each program presents the author’s personal experiences, background and artistic philosophy while focusing on important works.

Mann’s first novel, Buddenbrooks, a superb portrayal of the decline of a middle-class family, established him as a leading German author at the age of 25.  In subsequent works, such as Death in Venice and the Magic Mountain, he confronted the spiritual controversies of the 20th-century human experience.   (In English)