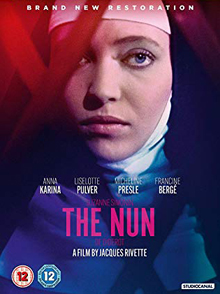 In eighteenth-century France a girl (Suzanne Simonin) is forced against her will to take vows as a nun. Three mothers superior (Madame de Moni, Sister Sainte-Christine, and Madame de Chelles) treat her in radically different ways, ranging from maternal concern, to sadistic persecution, to lesbian desire. Suzanne’s virtue brings disaster to everyone in this faithful adaptation of a bitter attack on religious abuses by the Enlightenment philosopher Denis Diderot.