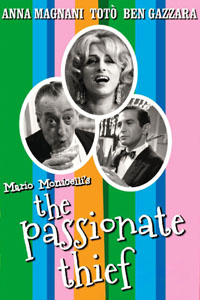 On New Year’s Eve, an insecure, struggling actress (Anna Magnani) has nothing to do. When a colleague invites her to a New Year’s party, she jumps at the opportunity. Accidentally she runs into an old acting acquaintance (Toto), who is helping a professional pickpocket (Ben Gazzara) steal from people during the hustle-bustle of New Year’s Eve festivities. During the course of the evening, they have numerous crazy, humorous adventures all over Rome at different parties, restaurants, and even the Trevi fountain. Magnani’s character (Tortorella) falls for Gazzara’s character (Lello) without knowing what he’s up to, while Toto tries to placate them both.