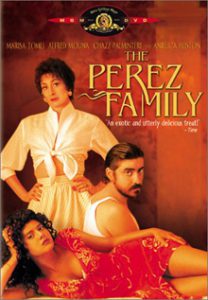 In an attempt to secure a sponsor, an unlikely group of Cuban refugees become a “family” as the U.S. Immigration and Naturalization Service gives families priority over others. In the process, a political prisoner who hasn’t seen his wife for twenty years and a disaffected sugarcane cutter fall in love. An excitable brother and a love struck cop contribute to the general confusion. The inevitable humorous romantic entanglements ensue as a final confrontation is set up.