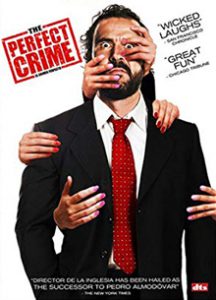 Rafael is a women’s clothing clerk at a large Madrid department store, Yeyo’s. His department is filled with beautiful, comely young women whom Rafael routinely seduces. When Rafael vies for a management position with Don Antonio, a men’s clothing clerk whom Rafael despises, a fluke causes Don Antonio to win the promotion. He fires Rafael and a fight ensues in which Rafael accidentally kills Don Antonio in a department store fitting room where they work.  He is blackmailed by the unattractive Lourdes (Mónica Cervera), who witnessed the crime and helped him get rid of the body. Forced to marry her, Rafael lives in constant fear of Lourdes — both what she will make him do, and whether she will report the crime. Driven to the breaking point, Rafael begins to wonder if knocking off Lourdes might solve his problems.