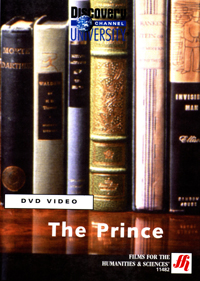 When Niccolò Machiavelli penned The Prince—a heartless guide to creating and retaining autocratic political power that has no place for idealism and lofty virtues—he came to be widely regarded as the Devil’s servant. Over the centuries, though, The Prince has come to be viewed as a classic text of political theory, a manifesto of bare-knuckles business management, and a significant piece of Renaissance literature.   Written to shock and reeducate its reader, The Prince still manages to cause a stir today.  This program explores the moral ambiguities of power through Niccolò Machiavelli’s treatise on political philosophy.  Henry Kissinger; Yale University’s Donald Kagan; Roger Masters, author of Machiavelli, Leonardo, and the Science of Power; Riccardo Bruscagli, of the University of Florence; former presidential hopeful Gary Hart; and others consider the ramifications of political realism and point out the influence of Machiavelli on American foreign and domestic policy.  Reenactments from Machiavelli’s life, period artwork, and location footage vividly evoke the man and his times.