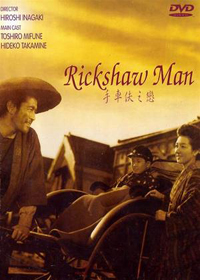 At the turn of the Twentieth Century, rickshaw driver Matsugoro “Matsu” is a happy man and a troublemaker well-known by everyone in his village. One day, Matsu sees an injured boy, Toshio, and brings him home. His mother Yoshiko Yoshioka asks Matsuo to take the boy to the doctor and then her husband Capt. Kotaro Yoshioka asks her to reward Matsu. However the rickshaw man refuses the money and becomes a friend of the family. When Kotaro unexpectedly dies, Matsuo helps Yoshiko to raise her son. Soon he falls in love with her, but he does not dare to open his heart to Yoshiko since they belong to different social classes.