The Roads of Exile 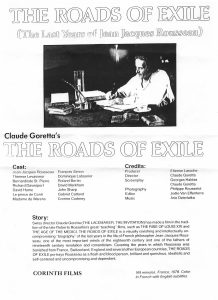 Swiss director Claude Goretta has made a film in the tradition of the late Rober to Rossellini’s great “teaching” films, such as THE RISE OF LOUISE XIV and THE AGE OF THE MEDICI. THE ROADS OF EXILE is a visually ravishing and intellectually uncompromising “biography” of the last years in the life of French philosopher Jean-Jacques Rousseau, one of the most important mind of the 18th century and one of the fathers of 19th century revolution and romanticism. Covering the years in which Rousseau was banished form France, Switzerland, England and several other European countries, THE ROADS OF EXILE portrays Rousseau as a flesh and blood person, brilliant and querulous, idealistic and self-centered and uncompromising and dependent.