The Roman Empire in the First Century – Years of Eruption 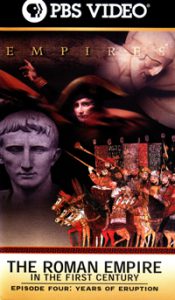 Nero’s death in 68 AD ended the Augustan dynasty and left Rome without a ruler. The empire descended into civil war as generals fought each other for the throne.  Vespasian was one of Rome’s top generals and was fighting Jewish rebels in Judaea. But he realized that he had as much claim to the throne as any other general. Encouraged by his soldiers, he suspended the war and marched on Rome.  Rome became a battlefield in which around 50,000 people were killed.

At the end, Vespasian was emperor. But he lacked authority. He knew he needed a foreign victory to secure his throne.  He turned his attention back to Judaea. By 70 AD, the last Jewish rebels had retreated to the walled city of Jerusalem. After a long siege, the walls crumbled and the rebels fled to the temple. The Romans burned it to the ground, killing everyone inside.  Back in Rome, this great victory brought in a new age of confidence and optimism. Vespasian also started a massive building program. This included early work on what would become the Coliseum – a huge amphitheater for games and gladiators, the movie stars of ancient Rome.

In 79 AD, the Romans suffered a double blow: Vespasian died and Pompeii was swallowed up by the ash and mud of Mount Vesuvius. A witness to both these events was Pliny the Younger. His uncle commanded the fleet around Naples and died at Pompeii, a victim of his own curiosity.  Pliny the Younger became a senior adviser to Vespasian’s second son, Domitian. It was a difficult balance, because Pliny was an honorable man and Domitian was a tyrant in the worst traditions of Caligula and Nero.  Like them, Domitian’s rule was cut short. He was murdered by a group that included his own wife. Rome was again in the hands of the generals.

This time they chose not to fight, but rather to work together and choose a new emperor. They chose Trajan, a Spanish-born Senator and general.  It was a bold move, but very successful. With trusted advisers, such as Pliny the Younger, Trajan expanded the Roman Empire to its greatest size and launched public works, tax relief and a child welfare program. His reign turned the Roman Empire into a multicultural global society that’s still relevant today, 2,000 years later.