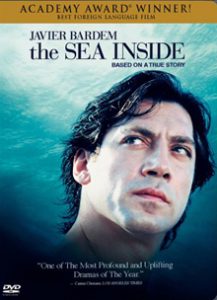 Life story of Spaniard Ramón Sampedro, who fought a 30-year campaign to win the right to end his life with dignity. Film explores Ramón’s relationships with two women: Julia, a lawyer who supports his cause, and Rosa, a local woman who wants to convince him that life is worth living. Through the gift of his love, these two women are inspired to accomplish things they never previously thought possible. Despite his wish to die, Ramón taught everyone he encountered the meaning, value and preciousness of life. Though he could not move himself, he had an uncanny ability to move others.