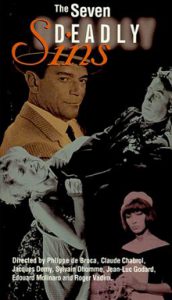 Seven directors each dramatize one of the seven deadly sins in a short film. In “Anger,” a domestic argument over a fly in the Sunday soup escalates into nuclear war. In “Sloth,” a movie star would rather pay someone to tie his shoe than bend over to do it himself, and he can’t be bothered to accept a starlet’s sexual favors. In “Gluttony,” a peasant family on its way to the funeral of a relative who died from indigestion stops regularly to eat and drink en route, arriving in time to eat some more. In “Greed,” a high-class prostitute refunds the price of a cadet’s lottery ticket. In “Pride,” an unfaithful wife finds reason to reform. And so on through lust and envy.