The Seven Wonders of Ancient World 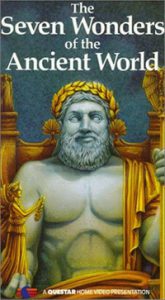 Documentary discussing the seven man-made wonders listed by Philo of Byzantium 2000 years ago: the Colussus of Rhodes, the statue of Zeus at Olympus, the Mausoleum at Halicarnassus, the temple to Artemis at Ephesus, the pyramid of Giza, the Pharos of Alexandria and the Hanging Gardens of Babylon.

This video, although at times sensationalistic, is a good introduction on how the Greeks and Romans viewed their Mediterranean world. From the Pyramids to the Colossus of Rhodes — as well as the lesser known Mausoleum at Halicarnassus — viewers get a glimpse of the ‘wonder’ as well as some general history. The video also points out the limited scope of these ancients: it makes note that structures like the Great Wall of China, unknown to the Mediterranean peoples, was left out. A good way to spend 50 minutes, this video is a decent overview of how the Western world saw itself.