The Silences of the Palace 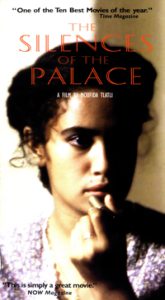 Set in 1950s Tunisia, the film is about a 25-year-old woman, Alia, who returns to her place of birth—a prince’s palace in which her mother, Khedija, worked as a house servant and mistress. Alia had fled the palace ten years earlier, at which time she tried to bury the tortured memories of her childhood. In her visit to pay her respects for the death of the prince, Alia wanders through the largely abandoned palace where she is confronted by memories represented as detailed flashbacks of her childhood.  She begins to piece together a narrative about her mother’s sexuality and sexual exploitation in a space ordered by gender and class difference, and is re-awakened to her persistent questioning about her father’s identity. As Alia negotiates her past, she also deals with her current relationship to her lover, Lotfi, who has asked her to have what seems to be yet another abortion. Her development throughout the film contrasts her awakening to a past of sexual and social servitude which many of the female servants experienced in the palace against her own contested independence fraught with pain, conflict and uncertainty.