The Soul of Bread 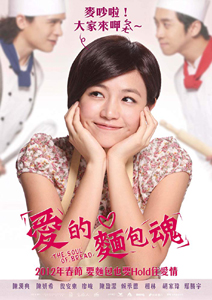 Gao-bing works in a bakery in a small town. The owner, Mr Chiu, is totally into his Rock ‘n ‘Roll band, and his apprentice, Di, doesn’t seem enthusiastic about learning baking at all. The bakery is progressively loosing business and Gao-bing doesn’t know what to do about the situation. All he can do is work harder and make more bread. Ping, the daughter of Mr Chiu who grew up with Gao-bing, is now Gao-bing’s girlfriend. She often complains that Gao-bing only follows the traditions and doesn’t make any real effort to save the bakery. In order to develop revolutionary new flavors, Ping takes baking courses in the city where she meets Bread.

Bread, born in America, is charming and humorous. He falls for Ping at first sight. Even though Ping is with Gao-bing, she finds that Bread’s bread has a special magic. She thinks that Bread might be the one who could save the bakery. Under Ping’s encouragement, Bread moves into Mr Chiu’s house and becomes Gao-bing’s roommate. Bread never hides his feelings toward Ping and always says, “We must put our passion into the bread”. Gao-bing disagrees with Bread’s western style and thinks of him as just another American. However, Bread is also a threat to his relationship with Ping, so Ping must now decide which guy is the one for her.