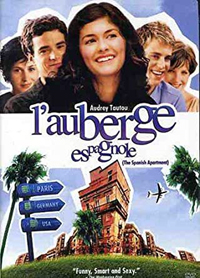 Xavier (Romain Duris) is a French university student who moves to Barcelona, Spain, to learn Spanish in order to score a desirable job. Residing in a house with other young Europeans of varied nationalities, Xavier has a life-altering experience living in such an international environment. After a visit by his girlfriend, Martine (Audrey Tautou), Xavier realizes that she may not be the one for him, and starts to fall for a friend’s wife, the lovely Anne-Sophie (Judith Godrèche).