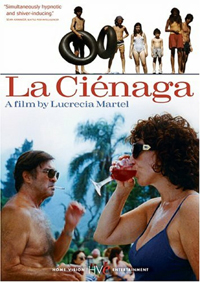 Mecha, a woman in her 50s with several teenage children and a husband, Gregorio, wants to remain looking young. In order to avoid the hot and humid weather of the city, the family spends the summers in their decaying country estate named La Mandrágora. After Mecha falls and injures herself, she is confined to her bed, and takes to drinking. She resents her gloomy Amerindian servants, whom she accuses of theft and laziness. Mecha’s cousin Tali, who lives in a modest house in town with her husband Rafael, makes repeated visits with her brood of young, noisy children to escape from her claustrophobic home. Before long, the crowded domestic situation in both homes strains the families’ nerves, exposing repressed family mysteries and tensions that threaten to erupt into violence.

The release of Lucrecia Martel’s La Ciénaga heralded the arrival of an astonishingly vital and original voice in Argentine cinema. With a radical and disturbing take on narrative, beautiful cinematography, and a highly sophisticated use of on- and offscreen sound, Martel turns her tale of a dissolute bourgeois extended family, whiling away the hours of one sweaty, sticky summer, into a cinematic marvel. This visceral take on class, nature, sexuality, and the ways that political turmoil and social stagnation can manifest in human relationships is a drama of extraordinary tactility, and one of the great contemporary film debuts.