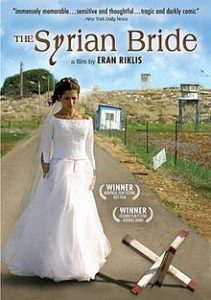 In Majdal Shams, the largest Druze village in Golan Heights on the Israeli-Syrian border, the Druze bride Mona is engaged to get married with Tallel, a television comedian that works in the Revolution Studios in Damascus, Syria. They have never met each other because of the occupation of the area by Israel since 1967; when Mona moves to Syria, she will lose her undefined nationality and will never be allowed to return home. Mona’s father Hammed is a political activist pro-Syria that is on probation by the Israeli government. His older son Hatten married a Russian woman eight years ago and was banished from Majdal Shams by the religious leaders and his father. His brother Marwan is a wolf trader that lives in Italy. His sister Amal has two teenager daughters and has the intention to join the university, but her marriage with Amin is in crisis. When the family gathers for Mona’s wedding, an insane bureaucracy jeopardizes the ceremony.