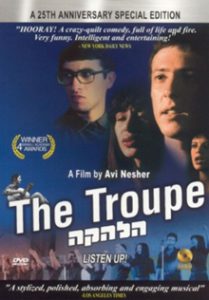 The Band, הלהקה, (also known as The Troupe) is an Israeli comedic musical, first shown in April 1978, about an army singing group in 1969. Three new members are hazed at first, one of them falls in love, and the choir’s leader, in preparation for a television appearance, rehearses the troupe so much they revolt.  The movie, set in the Israeli 1969 War of Attrition, tells the story of a prestigious military band, and the tensions and ego crises new band members cause when joining the band.

The Troupe is based on the real-life stories of two of its ensemble cast.  It focuses on 12 young people who are brought together as members of an Israeli army entertainment troupe, in the year following the Six Day War.  Their stories unfolding against the backdrop of an evolving Israel where the euphoria of victory has been replaced by anxiety and uncertainty, reveal friendships formed, passions inflamed, and rivalries provoked.