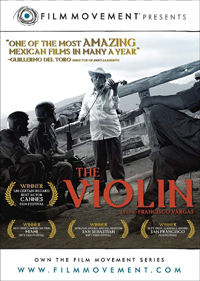 An elderly Mexican musician, Don Plutarco (Ángel Tavira), leads a traveling band that also includes his son, Genaro (Gerardo Taracena), and grandson, Lucio (Mario Garibaldi). Determined to fight the country’s military regime, Plutarco and his family help to supply guerrilla fighters by hiding ammunition and other supplies in their instrument cases. When Plutarco’s village is overrun by the regime, he boldly decides to further undermine their efforts.

El Violín opens with a horrific scene set in a ramshackle hut, where an army sergeant tortures a peasant trussed to a chair. The camera is placed at ground level behind the victim. The rest of the film is a flashback that turns on the quiet old man traveling on a mule between a village occupied by the army and the guerrillas’ hideout in the mountains nearby. He manages to appease the military commander with his music while using his violin case to transport ammunition to the rebels. It’s carefully paced, shot in grainy black and white and, with no formal exposition, we’re left to form our own conclusions about this harsh image of social injustice. The film’s guardedly positive ending resides in the abiding decency and self­ respect of the old man, who has passed to his grandson a song of pride, self-respect and resilience.