The Way We Laughed 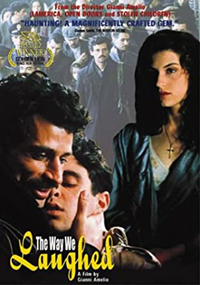 A tragic tale of brotherhood, Amelio’s ambitiously structured film spans six years (1958-64) in the lives of an illiterate Sicilian named Giovanni (Enrico Lo Verso, from L’america) and his younger, enigmatic brother Pietro (Francesco Guiffrida) as they seek a new life in the class-divided city of Turin. Divided into six novel-like chapters that cover one pivotal day in each passing year, this emotionally resonant drama reveals how the gradually successful Giovanni desperately wants Pietro to achieve respectability as a schoolteacher. But when a sudden murder forces each brother into moral compromise, Amelio’s film evolves into a mysterious study of dysfunctional loyalty, charting the growth of postwar Italy as it charts the love and sacrifice that will change the brothers’ lives forever. While it demands the viewer’s rapt attention, The Way We Laughed is a satisfying film that offers no easy answers to its complex human equation.