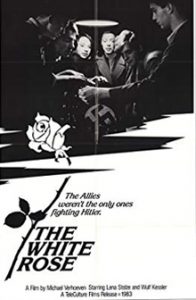 During the Second World War, a small group of students at Munich University begin to question the decisions and sanity of Germany’s Nazi government. The students form a resistance cell which they name the “White Rose” after a newsletter that is secretly distributed to the student body. At first small in numbers and fearful of discovery, the White Rose begins to gain massive support after a Nazi Gauleiter nearly incites a student riot after a provokative speech. At this point, the matter is taken over by the German Gestapo, who pledge to hunt down and destroy the members of the White Rose.