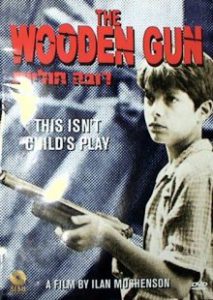 The Wooden Gun takes place in Tel Aviv in the early 1950s. In a clear-eyed fashion that would have been impossible in a film made by “outsiders”, the plot details the conflict between native-born Israelis and the newly arrived European refugees. The various fears and prejudices of the adults are passed along to their children, upon whom director Hans Moshenson concentrates. Largely comprised of non professionals, the teen-aged protagonists and antagonists are remarkable in their sincerity and conviction.

At the tender age of 10, Yoni Schreiber (Ark Rosen) is a boy beyond his years; his mother is a Holocaust survivor and his father a veteran of Israel’s War of Independence.  After being assaulted by a youth gang, Yoni and his freinds plot their revenge, a battle of honor, to fall on Independence Day.  But only in their moment of truth does it become clear that this is no kid’s game.  Set in the tense atmosphere of 1950’s Israel, this incisive film about rival groups of adolescents raises hard questions about heroism, nationalism, and friendship.